Day 2 of KC Restaurant Week: Grunauer's Viennese decadence--be sure to order the Esterhazy Torte. Book your res on OpenTable.com

How lucky are we to have Grunauer Restaurant in the Crossroads?  Because their second location is not just across town, it's the other side of the planet: in Austria.  And this week, thru Sun. Jan. 24, during KC Restaurant Week, you may choose pork roast,  Schnitzel or Hungarian goulash, for lunch for $15, and more choices for dinner, $33.

Now usually I skip desserts at lunch.  Not at Grunauer.  I can't say it loud enough: Instead of the healthy and light winter salad, go straight to Valhalla.  Choose their most popular dessert ever, the Esterhazy Torte! 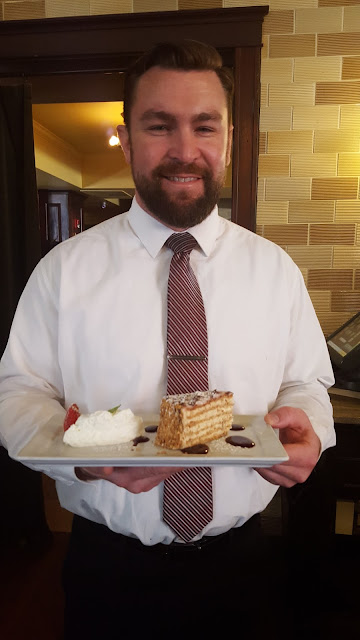 Trevor Ashby, a most personable gent with a great sense of humor, is the GM.  He described this signature dessert as pure decadence.  "It's almost too much," Ashby said.  And I replied, "Actually, it's like Goldilocks and the Three Bears.  It's JUST RIGHT."

I admit, I was a bit rusty on my history of the Esterhazy family, until I googled it when I danced a waltz in my kitchen upon returning home.  I was reminded that Franz Joseph Haydn, one of the big six classical composers of Europe, was born just outside Vienna. He worked for three of the Esterhazy princes.

"The Esterházy family was one of the richest and most powerful in the Hapsburg monarchy. In addition to their palace in Vienna, they owned palaces throughout Hungary and in today`s Austrian province of Burgenland. The Esterházy princes led a regal life and governed as sovereigns over their principality. A significant period in Haydn`s life commenced as Prince Esterházy`s “deputy kapellmeister´´ in Eisenstadt, “...where I wish to live and die,´´ Haydn wrote in a letter dated 6 July 1776.

Esterházy I, had converted a glasshouse into a theatre in the palace park. The family's motto was: Lovers of splendor.  Esterhazy palace was known as a Hungarian Versailles, containing an opera house, puppet theatre and numerous adjacent buildings – a cultural centre on par with European standards. Haydn lived and wrote and conducted there for 11 summers, from 1766/77.

You know who would have loved Haydn?  Taylor Swift.  He was 250 years ahead of her time.  Because he negotiated owner's rights to his music.  He was allowed by the three Esterhazy princes to sell his work elsewhere.  And that is what led to his wider fame and popularity. 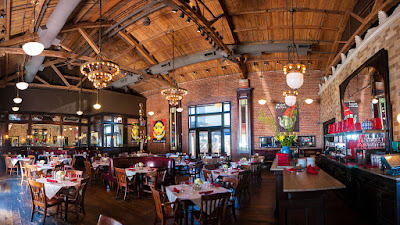 OK, local lovers of splendor.  Book a reservation right now, from your computer, at OpenTable.com.  See the menus, pick your choice of 94 restaurants during KC Restaurant Week.  I hope you love the Esterhazy Torte as much as I did.