Tracy dares Tony: see this ONE play at Fringe/Just Off Broadway: Phil Kinen's BEEN FINN, The story of Huckleberry Finn at age 50 meeting his bastard son

I challenge Tony to change his mind.  Fringe Festival, thru July 31, makes a terrific 'staycation'.  For $10 a ticket, (the cost of one great New York City bagel), I'm staying home and spending now thru Sunday July 31 seeing GREAT theatre in a truly great theatre town: KC.

Tony has just poopooed Fringe in the past because he saw the wrong, weaker shows.  Whereas I've invested five hours just researching your options.   This year's 108 choices include many biographies. 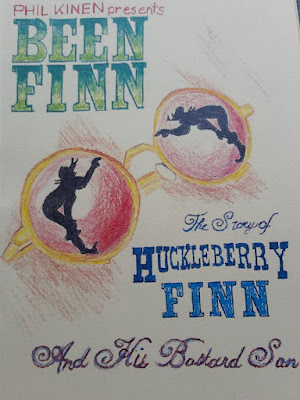 Huck Finn if he were 50 meeting his bastard son.  (There is a great swordfight.)  Annie Oakley, Crazy Horse--and two one acts by Tennessee Williams.  Plus the standing-ovation receiving "Mama's Boy"--at Fishtank--the true story of Blake Friis and his mother's suicide--by a charming, talented and wise comic writer with impeccable timing and great heart.
---
BEEN FINN

This show is brilliant.... playwright Phil Kinen has woven in a Jungian interpretation of Huckleberry Finn...the Puer Aeternus boy who never grows up.  And when you see these two characters each do their transformations in personality it is remarkable, believable and breathtaking! 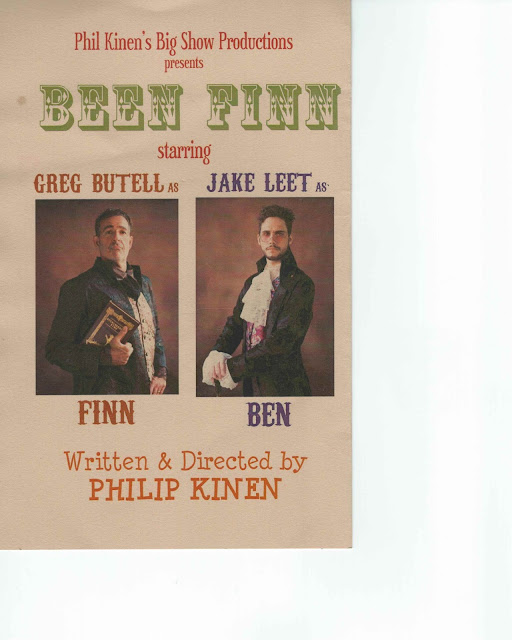 Greg Butell and Jake Leet deliver performances good enough to go straight to Broadway.  Trust me, Butell will have to fend off mega-star actors like Hugh Jackman who would covet the role Kinen wrote and Butell has created.  And Jake Leet is so perfect that he inspired Kinen to complete THIS play out of his series of five Huckleberry Finn plays just so he could co-star in it.  The Johnson County Library is so keen on these plays they pay Kinen a stipend to do monthly updated readings.  This is a big deal.  We've never had a local playwright be so supported.

Read the attached notes, and go see Been Finn. 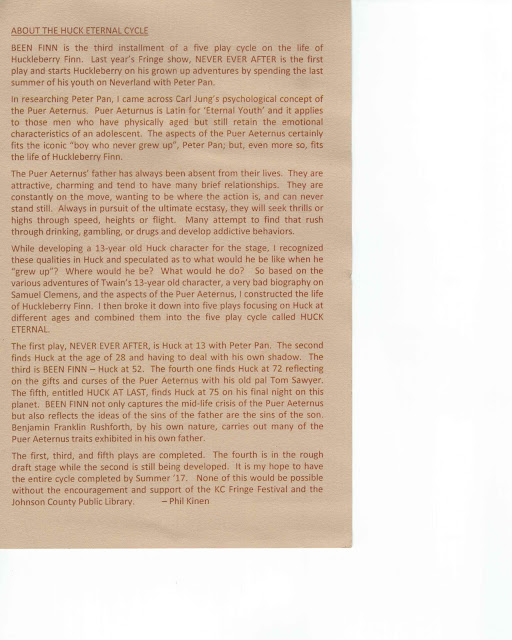 So far, and this is early in the 11 day Fringe Festival 2016 season,
Phil Kinen's Been Finn is the best show I've seen yet

out of six of the 13 tickets I've purchased.  I also screened 30 teaser performances.  Email me for the rest of my picks.

Been Finn performances thru July 30, 2016:
Monday 8 p.m.; Wednesday 6:30 p.m.; Friday 11 p.m; Saturday 4:30 p.m.
And it may win a bonus performance Sunday July 31.  Check the web site.
Note!  Just Off Broadway Theater is at 3015 Penn Valley Drive--but you cannot get there direcly from 31st St.unless you rapell down the cliff.  ou must come in via Wyandotte.
Either take 31st to Main south by the car dealership at 32nd to Wyandotte.
Or, from the south, via Linwood to Wyandotte.  Then it's behind the orange barricade!!!  But worth it.

Tickets available at the door.
They do have snacks and they sell drinks.
Tickets are $10...available at the door since it is a large venue...it won't be sold out.
But you must have a current 2016 Fringe button: this costs $5 so if it's your first or only Fringe Festival event you have to buy the $5 button as well.  But then you can use it for other great $10 performances and "Fringe" coffeehouse benefits throughout the year.

www.kcfringe.org
You may also buy tix, or print out the tix you bought online, in the lower level of Union Station.  Warning, the arrogant dummies at the station turned off the 3 story escalator "to save utilities".  There is a very hidden elevator. Park in Union Station's front elliptical circle and pretend to go to the Post Office, so you don't have to pay $5 just to park and run in to print out tix. Don't get me started.

Sam Brownback's crazy cousin Charlotte is trying to sneak her PTSD boyfriend Greg Goode into the halls of Congress--with a gun!!! Election fixing and bribery charges??

But did Charlotte O'Hara bother to "vet" her boyfriend as a suitable candidate first?  Is he a dangerous Manchurian Candidate?  Might his reported psychiatric issues cause him to grab his gun and shoot up the halls of Congress?

Haven't we had enough wrong-thinking armed veterans with PTSD or NPD/Narcissistic Personality Disorder from the Kansas City area for one month?   (eg Cosmo Long, the Baton Rouge cop killer, who changed his name to an Egyptian version of Jesus and the slayer of Ramses II?)

How does this craziness happen?  Follow the money, honey.  And the mortgage.  If you've just divorced your Honey Pot millionnaire hubby, and want to get outta Dodge, or rather your palatial Montana style southern OP mansion, well, Annie get yourself a gun-toting hunky boyfriend, prop his *ss up and why not gallop to Washington DC.

You can fool some of the people some of the time.
--Abraham Lincoln at the 1856 National Republican Convention

Just how 3D:ditsy/delusional and dumb is Charlotte O'Hara, the campaign manager and fixer for Greg Goode?

1.  Well, many recall Jeff Roe's former politico pal, the late Pat Gray.  When Charlotte ran against Annabeth Surbaugh for chairman of the Johnson County BOCC/Commission, the FIRST time out of two, Gray hustled Charlotte and the aging Mr. Sun Tea hubby, out of $675,000!!!  Gray mailed postcards with virtually no copy.  Just cupcakes on the cover art.  Huh?  She came in third, spending an estimated $33.75 PER VOTE!

3.  Charlotte O'Hara, a lovely woman in person and a good mom,  five adopted kids, is known as the "Queen of Gallop-polling Ambition".  She has told me twice about the
BROWNBACK FAMILY DYNASTY PLAN!!
Cousin Sam was in the US Senate at the time.  He realized how jacked up that was, so he was coming home to Kansas, would run and serve as Governor twice, (which he now has) then ascend to the Presidency from here. (Oops.)  She would run for Ks. Senate, (oops, third loss in a row) and then take the Governorship.  (How's that workin' for ya?)

Scarlett/I mean Charlotte loses mansion!!!!
Stalks and finds boyfriend Greg Goode.  Retired Army Lt. Colonel.  And if she can just manage to fool enough voters to get her Manchurian Candidate through the Aug. R. primary, she can escape Tara, I mean her plans to move to Topeka, and gallop into Washington DC society.
4.  So O'Hara skips the vetting process, well, maybe a couch audition.
She runs the new boyfriend for Congress, on a strategy of voting out all incumbents.  Reportedly, it was Charlotte O'Hara who sought out Kansans for Life for Goode's endorsement.  Instead he took the fake version, a volunteer ministry fraught with a dreadful past history, called Kansas Coalition for Life.  Ks. Coalition for Life is a small group in Wichita who are the Troy Newman group of folks who refuse to get along with anyone, and as you may recall, his secretary CHERYL Sullinger's phone number was found in GEORGE TILLER'S murderer car when he was arrested. If you google CHERYL, you will find she is a FEDERAL FELON FOR ATTEMPTING TO BLOW UP A WEST COAST ABORTION CLINIC.


----
To read about serial rageaholic veteran and candidate for Congress, Greg Goode, read the companion story on our sister political satire and commentary site: www.JocoPost.com

There is a 170 page investigative report of his past.