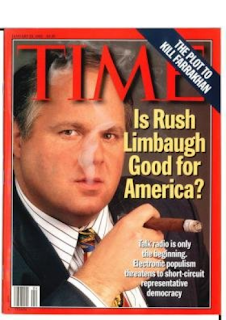 What an ending.  What a beginning.  How one creative genius made a difference for Americans.  A personal reminiscence from Tom Bedell, who sold radio advertising in Kansas City and nationally--for 31 years.

What an ending.  Not many are able to claim equal parts adulation and disdain as they leave the living behind. As he was in life, Rush is, in death, still the source of such conflicting thought. To some he was a prophet, while others believed him a devil. Great man, miserable human, leader, enabler, patriot, traitor…just a few of the words used to describe him. Viewed through the audiences’ personal prisms they were surely accurate. Good or bad. But I hold a different view of the late Rush Limbaugh. To me he was just one thing and it was neither good nor bad. He was a broadcaster. Maybe the best of all time.

Early in his national syndication with only around 50 stations airing him I had the opportunity to sell his show locally. Even then he was generating controversy. Advertisers loved him or hated him. Those that loved him gladly paid whatever was asked for a spot on his show. Those that hated him threatened to leave the station because we were carrying him.

Funny thing, the revenue the lovers generated was more than equal to the threatened losses from those that hated him. The station stayed the course and eventually those advertisers that hated benefited from Rush as the station’s ratings rose because of him. So even those that hated him were profiting from a great broadcaster. Isn’t that what broadcasters are supposed to do? Deliver ears. Rush did that in spades.

Because it was early in his syndication, a few times I found himself in his company. Positive encounters I remember still over 30 years later. One doesn’t soon forget being in the glow of greatness. On one of these occasions, I heard Rush explain a little about how his show was built. He was in town to promote a series of “Rush Rooms,” popular upscale restaurants that held listening parties for the audience. What a deal, the audience paid a surcharge and ordered lunch to listen with fellow “ditto heads” to what they could hear for free in their office or car! Rush was telling the story of his failings and how he overcame them with hard work and creativity.

The creativity is what caught my attention. He explained that he wanted to do something new, something that would take advantage of all he learned as a broadcaster. To do that, he said, he turned to something old. The Top 40 Format. The format he cut his teeth on as a young broadcaster. He knew that the format was successful in part because it created an emotional connection with the audience through the music that was aired. He also knew it was entertaining because of the DJ’s personality and the fun and funny parodies and gags that they employed. He knew that format inside out and what the audience wanted. So, he gave it to them in a newly remodeled Top 40 Format. 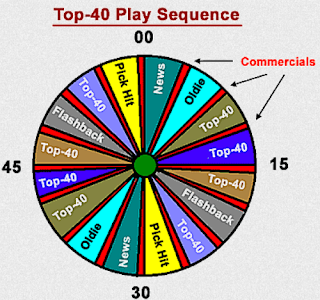 Rush stared at this Top 40 "clock" every hour
for the first 10 years of his floundering career.
Until he had a new idea...

So how do you transition a music format to talk? That was his genius. He understood that music was not the only way to emotionally connect. Issues can form even deeper bonds. So why not play issues instead of music? And that’s what he did.

The scheduling template, called “the clock”, dictated what was aired and when. Rush’s genius was, when the Top 40 clock called for a song, Rush would instead read a piece from the news. When the clock said to talk about a song, Rush talked about the issues from the news. When the clock dictated a parody or gag about pop culture, Rush did some of the greatest, BUT they were about the issues.

And they were funny. For as every great comedian knows, the best comedy is built on a truth. Rush took that truth to the extreme as all great humorists do. The result was you either embraced the truth or ran and hid from it. And Rush did it well, as only a great broadcaster could.

The rest is history. I’ve taken great delight in helping many small local businesses grow…because of Rush. He delivered on the broadcaster’s promise to provide those businesses with customers who spent money. And I made money too. But my greater delight is that I had a front row seat to watch a man who told us he had been down and out in a floundering career for 10 years even before his time in Kansas City, rebuild his life.

AND in rebuilding his life and reinventing himself, because he was professional and passionate about his calling, he rebuilt an industry. Radio in general became bigger and more profitable because of Rush. Especially AM radio. Because of the ratings and revenues he generated, radio had the resources to become better. Rush was able to achieve all that because he was, in his heart, a broadcaster. Maybe the best of all time.