Helling challenges editorial board, opposes 123GO, even gets City Mgr to admit Glorioso's brochures are disinformation

Hooray for Dave Helling, seasoned local reporter who has joined the STAR Editorial Board.  When they anonymously endorsed the deceitful 123GO Bond issue, Helling refused to sign on.  So for the first time since the 1970's, a brave editorial board writer wrote and SIGNED his own editorial."

Helling/KCStar: It's OK to vote against more tax increases in KCMO

Helling did actual reporting!  Got the City Manager, Troy Schulte, to go on the record that those Steve Glorioso $859,000 in brochures clogging your mailbox are full of "misinformation".  (What the real world calls lies and deceptions.)

123GO is a 40 year property tax hike, not 20.
(The City doesn't have staff to supervise and build $800 million in sidewalks, bridges, flood control, puppy shelters and disabled ramps!  Schulte's gonna trickle it out.  Some bonds won't be issued and sold to rich investors for 20 years!  And take another 20 to pay off.  But this vote empowers the Council to raise your property taxes every year under penalty of law.  THAT'S why this is so important.  In Ks, eg Joco, the 7 commissioners raise the mill levy WITHOUT A PUBLIC VOTE.  But Missouri requires a VOTE BY CITIZENS.  Big difference.

It's $100 a year or more, compounding.  May go to $248 per year for the average house.  Not $8 like Glorioso's brochures state.
Glorioso is the master of the shell game.  When he was staffer for Kay Barnes, he ramrodded through the Zoo bonds which then were mysteriously diverted to pay off TIF bonds in downtown KCMO!  Sneaky.  But that's somehow legal because they just "borrowed".  Which they will do again here.  Bet on it. 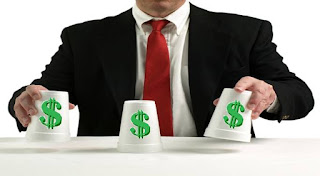 And there's a reason Glorioso has spent $859,000 on his disinformation brochures, with the Mayor refusing to debate, as usual.  They are targetting frequent voters only.  So no broadcast.  And they lied to the KC Pet Project.  Failed to admit their buyoff of them, $14 million, is NON-BINDING!    And contingent on raising another $7 million privately.  AND contingent on getting the Council to find $6 million a year for life--to turn the lights and the heat on in the shelter.

Bond issues build buildings.  They don't cut the ribbon or maintain them.
Helling's editorial questions how the City can afford to maintain the shelter when they are paying the Police Chief $500,000 to leave, and $200,000 to just one fire fighter in a lawsuit.  This is much like Gloria Squitiro and MammyGate.


And no matter what list Kathryn Shields and Jolie Justus ram thru the KCMO City Council this week, by STATE LAW, the only list or budget that counts is the City Manager's!
KCMO has a weak mayor/council//STRONG CITY MANAGER FORM OF GOVERNMENT.  They can only hire and fire him.  The City Manager is the final authority.  And he told Helling this week it will take him two YEARS to even make his lists.  And meanwhile, he will just do $3.2 million in improvements per year.

This Council was like the Ryan Health Care Bill idiots.  Debating details hours before their hasty vote to jam it onto the ballot and pray for low turnout.

But because it rewards rich investors, it requires 57.1% to pass.  Despite the phony rigged polling by Glorioso, it's in trouble.

Get your family and co-workers and neighbors to vote Tuesday April 4.

KCMO can do so much better.