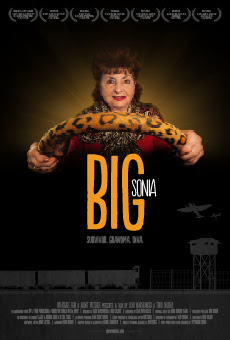 Big Sonia is the hit documentary film about KC's own Holocaust survivor--Sonia Warshawski--showing exclusively at Glenwood Arts, (Ranchmart South), 95th & Mission.  And YES, since it broke all ticket records this weekend, the film's run will be extended.  Currently at the Glenwood Arts, but due to its enduring popularity with Johnson County seniors, it may move eventually to sister theatre in downtown OP, The Rio.  Just check www.fineartsgroup.com for show times.

I attended the Q&A Sat. night with the film's producers: Sonia's grandaughter, Leah Warshawski and her husband, Todd Soliday--plus Sonia's two daughters.  Meanwhile, Sonia sat for most of five hours in the theatre lobby on her signature leopard skin sofa greeting wellwishers and posing for selfies.  It was a joyous celebration.  Over 2200 tickets were sold IN ADVANCE of opening weekend.

If you missed the Q&A, here are 12 things you don't know from the actual film.
1.  Her son's career is a very successful poet and author (lives in Napa), who wrote a book about crowd funding for indie movies.  So even tho Sonia was "hard on her son, compared to her daughters", I love the idea that but for him, this documentary might not have been made!

2.  It was his daughter, Leah Warshawski, (Sonia's granddaughter) and her husband, Todd Soliday, who lavished 6 1/2 years making this heartwarming and inspiring documentary.

3.  Three drones died in the making of the aerial shots of Sonia driving her big beige Oldsmobile to Metcalf South.  Including a flock of geese that took out one drone.  (The geese professed to be Canadian.  But I think they were Nazi geese...)

4.  It took 2 1/2 years just to get the aerial footage of Sonia driving.  Per Todd, sometimes the drone was out of range to capture Sonia's driving (she does get alot of speeding tickets!  Cops spot her leopard-wrapped steering wheel as she races down 95th St...).  And several times, Sonia assumed they got the aerial footage on the first try, so she just drove home!  Rather than pulling over and waiting to be told, "Take 2, grandma!"

5.  The mystery of Big Sonia's vanity tag?  428 ONE.  It stands for Fortunate One--a play on words concocted by her clever son, the writer.  It was years into filming before the team realized they should have masked Sonia's real plate number.  (due to asshat Holocaust deniers--who might stalk her or menace her.)  So in 34 places in the film, the crew had to go in and correct the license tag.  OY!!!!

6.  The film claims John's Tailoring and Alterations (the shop owned by Sonia and her late husband, John, a fellow survivor) was "the last tenant in the vacant Metcalf South mall".  At the Q&A, Brian Mossman chided Todd Soliday, saying, "Hey, I was here, too--upstairs!" referencing the fact that the Glenwood Arts theatres were also there.  Todd replied, "I learned long ago as a filmmaker, never to let the facts get in the way of a great story."  And, truth be told, Sonia's shop, John's Tailoring and Alterations WAS the last RETAIL tenant in the now-bulldozed mall.  While the Glenwood Arts movie theatres upstairs were a theatre complex, not a retailer.  So, no harm, no foul.

7. Spoiler Alert!
Both the Glenwood Arts and Johns Tailoring relocated successfully.  But only Big Sonia got "such a deal" from her former landlords, the families of two Russian Jewish immigrants and real estate tycoons, the late Sherman Dreiseszun and his nephew, the late Frank Morgan.  And yes, that was due to the intervention of Vernon May, the mall's loyal security officer.  This was all confirmed by Peter Newman, The Tax Man.  He too is a Holocaust survivor.  He and gorgeous wife, Bev, attended the Q&A.  Newman has been Sonia's tax preparer for many decades.

9.  In the last scene, we see the new leopard sofa being moved into Sonia's new shop.  And the filmmakers and Brian Mossman very ingeniously borrowed that same sofa for the Meet and Greet in the Glenwood Arts lobby last weekend.

10.  If you spotted the leopard print luggage tags on the young student's luggage, as she visits middle schools and shares Sonia's indomitable story--guess what.  The filmmakers thought of everything: they retailed those luggage tags--to help pay for the filming costs.  You may buy one on the web site: www.BigSonia.com

11.  As the film rolls out for distribution around the country, the team is even willing to host showings in non-theatres.  Sonia attends and asks questions and inspires others.

12.  She has hired staff to assist her at the tailor shop, so she can ALSO do visits to Lansing Prison with SueEllyn Fried--and as many teenage groups or 12 step groups as she can manage.

There is so much more info available on www.BigSonia.com website.

This film is a must see.  I'm wearing leopard print the rest of the year in Sonia's honor.

My favorite Big Sonia quote, if you're having a bad day:
"My Mom told me, If you are feeling down--look further down.  Then you'll be on top!"

And yes, another Sonia-ism is her darling dyslexic phrase of astonishment at all the good in the world:
"It's bog-mindling!"